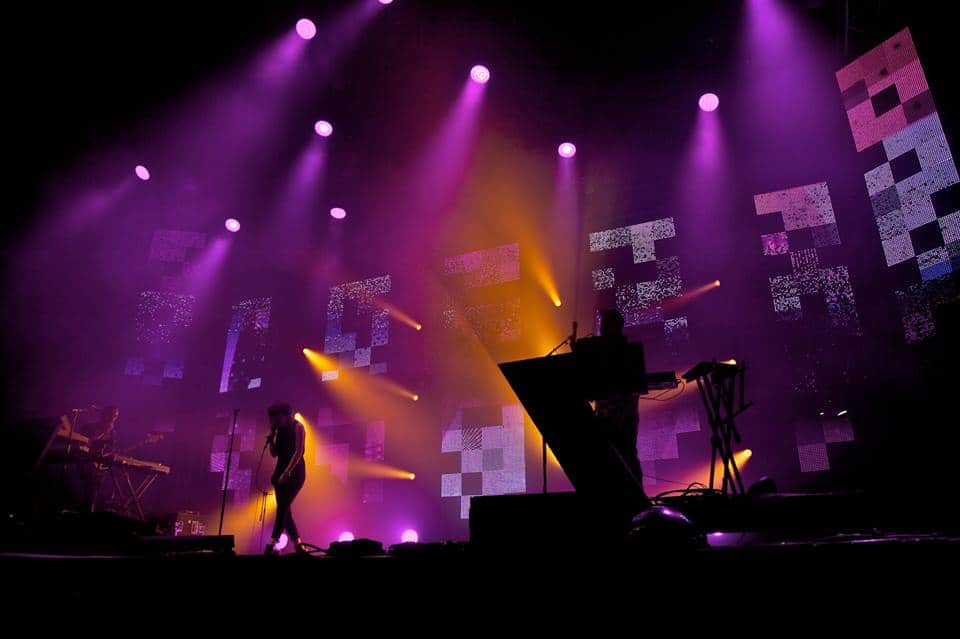 Working together with Bryte designs Cate Carter and Pablo Becket, we were presented with an Stealth LED design to which we had to find suitable rigging solutions to as well a cable management.

The plan was to use our Element labs Stealth but remove odd tiles and place different light source altering materials in front of other tiles. The Result an incredibly original looking and imposing stage design in a very large tent. We also supplied our high brightness Barco HD20 projectors for the IMAG screens.

About the John Peel Stage

Raucous, effervescent and gloriously sweaty, the John Peel Stage has always been Glastonbury Festival’s home to fiery new music. It’s where up-and-coming and thrillingly under-the-radar acts repeatedly transform this huge tent of a stage into the spine-tingling setting of an intimate club.

Formerly known as the New Bands Tent, the iconic yellow and blue canopy was renamed in 2004 in honour of the late and great DJ and Festival friend, John Peel. This aptly named stage continues its passion for new music and, like its revered namesake, has made an indelible mark on new music culture, being the early champion of so many artists. Every genre welcome, every genre celebrated; acts on the cusp of breaking through rubbing shoulders alongside the long-established.

In 2014, George Ezra broke-through with his packed-out set and London Grammar proved their worth to a pogoing throng. While 2013 was the year of Everything Everything and Phoenix, Daughter and Tom Odell. Among the 2015 standouts were Suede, Years And Years, Slaves and Jessie Ware.

Other recent highlights include Mumford & Sons’ outstanding performance in 2010 before they went galactic; Bruce Springsteen surprising a packed tent to perform alongside Gaslight Anthem in 2009; and in the same year, Florence And the Machine not only stunned a rapturous crowd with their performance, but as Florence ascended the lighting-rig, mouths dropped, hearts beat faster and they knew they were witnessing something special.

With other historic performances from the likes of The XX, The Black Keys, Wild Beasts, Cribbs, The Kills, Hot Chip, and Calvin Harris, the John Peel Stage has proved legendary.